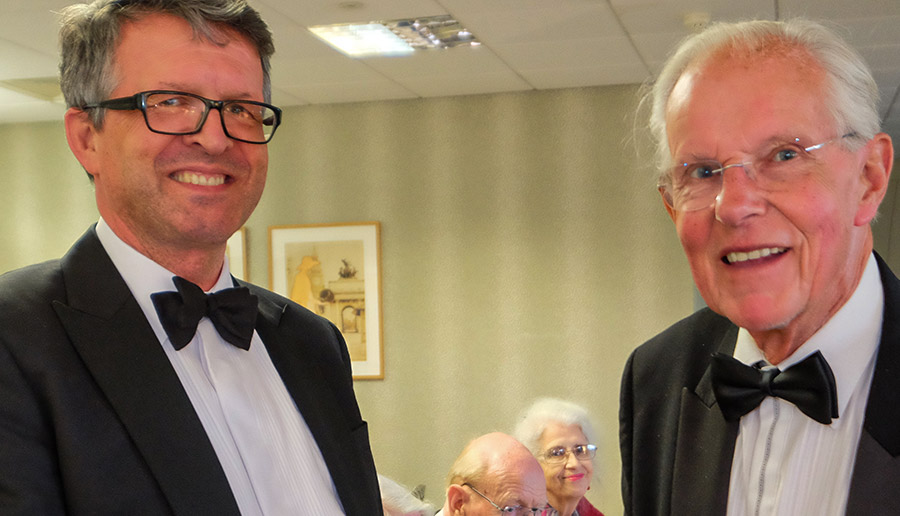 Dr Tony Newman-Sanders (President) presented Dr Rupert Courtney-Evans with the President’s Lifetime Achievement Award for 2017. This is a precis of the President’s commendation which was read at the Annual Dinner.

Rupert trained at Trinity College, Cambridge and Bart’s in London and continued training in Medicine up and down the M11 with sojourns in Southend, Whitechapel and the Brompton, ending up as a Senior Registrar in Cambridge. He was appointed to Mayday in November 1973.

A few themes emerged from Rupert’s early years; one was a growing enthusiasm for making Mayday the best it could be, making things work, using his energy and charm to get people to work together. He built up the Chest Medicine Service while remaining completely committed to Acute General Medicine and strengthened the team by appointing further colleagues including Andrew Miller.

In 1992 or thereabouts he was appointed Medical Director and made a big impression by being able to bring the best out of colleagues of all temperaments, leading by example and with a growing reputation for fairness and honesty. With the then CEO Ernie Walker and his Deputy the redoubtable Frank McGurrin, Rupert ushered in something of a Golden Age of leadership at Mayday as part of a clinically focussed leadership team that commanded respect across the hospital and beyond. He was in no small part responsible for growing the reputation of Mayday as a great, though challenging, place to work which certainly influenced my decision to apply for a job in Croydon.

It probably isn’t a coincidence that things seemed to plateau after he stepped down as MD but he continued to be a father figure to all, a source of wisdom and kind counsel to colleagues young and old. He continued to grow in stature as a physician, embracing new technologies and, even after retirement, keen to help out as a mentor and advisor in the A& E Department.

The reason why he is the recipient of the lifetime achievement award is that, more than almost anyone else, he shepherded hospital care in Croydon into the 21st Century with its struggle to be truly clinically led, yet multidisciplinary, specialist and expert yet holistic and collaborative, technologically enabled yet personal and compassionate.

And alongside this, his most meaningful and lasting achievement, his marriage to Pat, the best thing he found in Cambridge, and the raising of their children, blessed as all generous parents are with both struggle and sadness but with abundant joy and pride.

In short a role model, certainly for me, and a worthy recipient of this award.