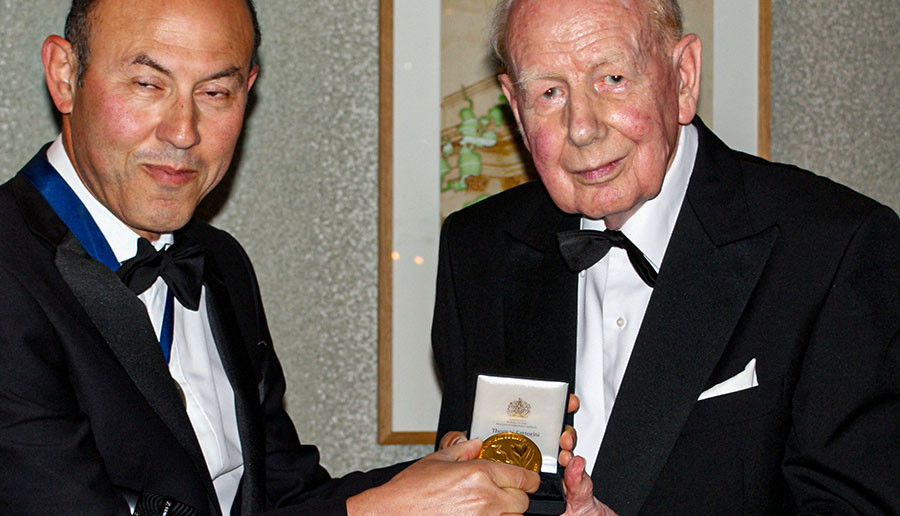 Dr John Manners is the first recipient of the CMS Lifetime Achievement Award. He was born in 1934 and educated at Merchant Taylor’s School before going up to Wadham College in Oxford. His clinical training was at St Thomas’s Hospital and he qualified as a doctor in 1959. He commenced training intending to become a Physician but later changed to Radiology, training at The Middlesex Hospital.

John arrived at Mayday 1974. He was the first high tech Radiologist with a special interest in cardiac catheterisation and angiography as well as being a trained physician. He also had another skill – that of an expert fund-raiser and managed to tap into large sums of money raised from charitable sources for projects that he really believed in. In the 1970’s Radiology was seriously underfunded

The fund-raising was used to re-equip the cardiac laboratory which put us ahead of all the local hospitals (St Georges was still at Hyde Park Corner then). This facility attracted our first modern Cardiologist, Dr Simon Joseph.

In 1981 John was appointed Clinical Tutor and, following the untimely death of Dr Dan O`Brian, he took over the campaign for a new PGMC. In 1985 the PGMC became a Charitable Trust due to John’s negotiations with the Health Authority, which resulted in a measure of independence that it still enjoys today.

He was Chairman of the Mayday Scanner Appeal and over a period of 10 years £750,000 was raised, mainly in small donations, given by the Croydon public. This enabled the purchase of Mayday’s first CT scanner plus other scanning equipment and was quite remarkable, as no-one thought it could be done!

In 1973 we only had about 16 full time and 6 part time Consultants, with one part time Paediatrician who was shared with St James, Balham! We all did what we could to see and treat patients as quickly as possible with no interference from lay managers. We only had one administrator, Mr John Bryant, the Hospital secretary, who seemed to be able to cope with most problems from parking to complaining patients and still find time for his regular lunchtime pint! We had a Matron, Mr Meldron Smith, to whom all the senior sisters reported and of course a theatre superintendent.

The local medical committee with representatives from General Practice, Public Health and Hospital Consultants oversaw the smooth running of health in Croydon. In those days we had about 7 or 8 hospitals at our disposal apart from the mental hospitals! This committee in turn reported to the Regional Medical Advisory Committee where John was Chair for 6 years (1987 – 1993).

He was doing all this as well as his job in the Cardiac and X-ray Departments, plus continuing his fund-raising.
John retired from Mayday in 1994 and went on to Chair the Heartbeat Appeal. He also took on the role of Honorary Archivist for Croydon Medical Society following on from his year of Presidency of the Society.

Hence you will see why Dr John Manners was such an obvious choice for the first recipient of the Croydon Medical Society Lifetime Achievement Award.